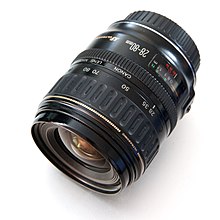 The
EF28–80mm f/three.five–five.6
is a zoom lens produced by Canon Inc. for their series of EOS single-lens reflex cameras. Canon produced eight iterations of the lens from 1989 to 1999.


The ‘L’ lens is identified past a red stripe effectually the lens barrel. It is a totally separate classification of lens, much larger and up to three times heavier, sharing very piffling if any features with the non-50 versions. The Fifty version is considerably faster, with an aperture range of f/2.8–4.0 (equally opposed to f/3.5–5.6). Unlike newer L-series lenses, it is not a constant aperture lens; the maximum aperture of this lens varied with the zoom (f/2.8 @ 28 mm, f/4.0 @ 80 mm). It uses a ring USM, and as several early professional USM lenses, manual focus is performed with a “focus past wire” organisation. The manual focus ring is a digital input that directs the lens computer to arrange focus using the autofocus motor. This was done to allow full-time manual focus with the relatively new ultrasonic motors. This lens predates the lower cost, non-L versions and production of this version ended in approximately 1996.

The offset iteration of the f/iii.5–5.vi (“USM” in the chart below) non-L lens is identified past the metal mount and distance scale. The initial USM version, while much smaller and lighter in weight than the L version, is considerably larger and heavier than later versions due to the internal eyes and the use of larger but quieter and faster ring motor USM. Production of the offset version concluded in (approximately) 1995. This lens is unique in the 28–80 mm f/three.5–5.half-dozen serial.

USM versions Ii through V deleted the DoF window and are considerably lighter in weight and smaller in bore. They retain the USM feature albeit with a lower-cost, slower but more compact micro-motor version. They share more in appearance with their non-USM siblings, as the trunk shape and weight are more like the not-USM than the outset USM version. The USM II through V versions also incorporate a plastic lens mount.

Merely the L and original USM lenses support total-time manual focusing (FTM), which allows the user to override autofocus simply by turning the focus ring. The USM versions II through V practise not.

Fifty-fifty lower toll non-USM versions (“Original” and “II” in the chart below) were produced as well. Like the USM II-V versions, these non-USM versions take a plastic mount and no distance or depth of field scales.