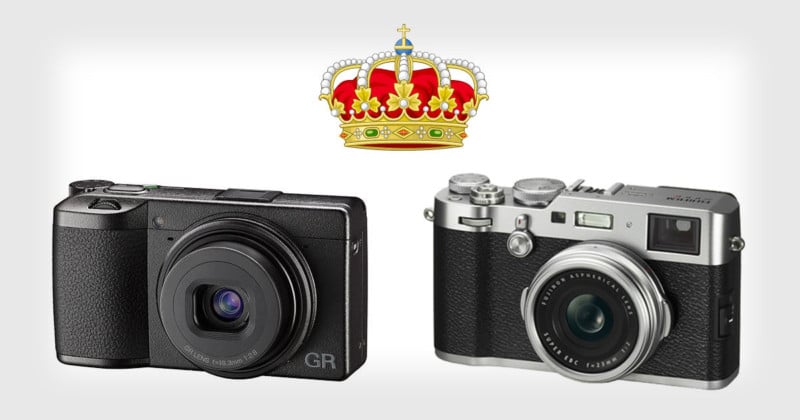 If you lot’re going to go serious about shooting all the fourth dimension, the best camera you tin can buy yourself is a quality compact. High-terminate DSLRs and interchangeable lens mirrorless cameras can be intimidating to shoot with for the everyday photos, not to mention an unnecessarily heavy load to behave. A compact is a camera you can take everywhere that will distinguish you from other “phonetographers” in both improved command and image quality.

There are two premium compacts that I was stuck between to take on my Trans-Siberian train trip: the Fuji X100F and Ricoh’s GR III.

GR cameras have a long history, with the initial design dating back to the GR1 released in 1996. Not much has changed much in its design, despite the digital update and tweaking to its sensor and software. Ricoh just got and so much right into the paradigm that there was little demand to reinvent the bike. They simply made a camera as modest equally possible while maintaining a top tier standard for the lens and non sacrificing ergonomics. The GR blueprint was and still is, considered to exist one of the great achievements of camera design in the 20th century, by many photographers

The X100F’south blueprint, by contrast is relatively more recent, originating from the X100 of 2010. Simply it’south inspiration is fatigued from some of the all-time archetype cameras. From the body you can see the Leica M3, the Nikon F cameras and the Olympus Trip have all fabricated their mark on it’s incredibly cute and bully design. From this, and its astonishing prototype quality owing to the fantastic Fujinon EBC lens and X-Trans sensor, has earned a reputation for being one of the globe’s best compact cameras. 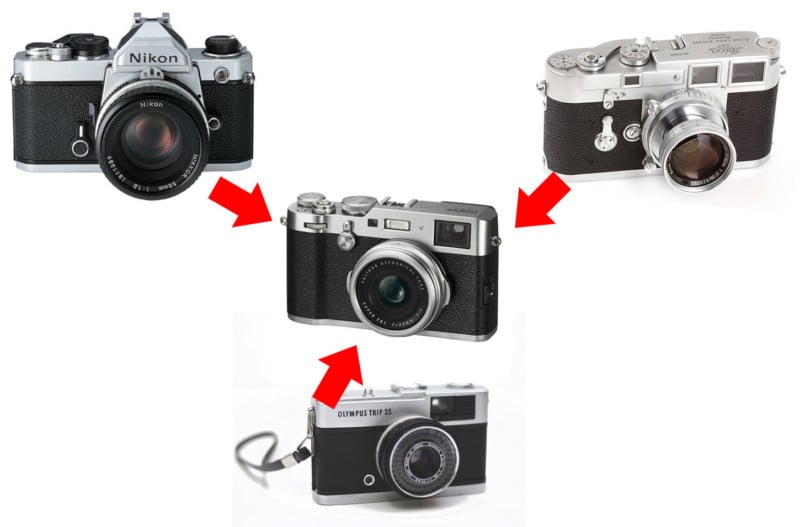 I took both cameras out to trial, and institute deciding between them extremely difficult. They are both fantastic merely very different cameras made for the similar purpose of street and travel photography. It came downward to the wire for me, so let’s get to what sets these apart, and how I reached my decision by going through the scorecard: 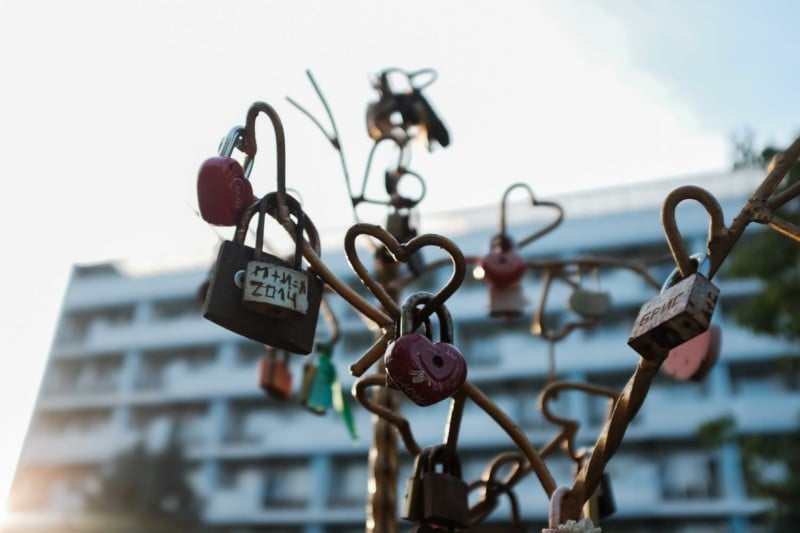 So just like the Ten-Pro, of which to I’thousand accepted, focusing with the X100F is fabricated like shooting fish in a barrel with an incredible AF organisation. The unmarried and wide tracking focus points work great, just for me the hybrid transmission setting was what I kept it in near of the time. By hybrid, I mean that you can go on manual control, but when you want to focus just press the AF push button on the back (positioned perfectly for your pollex) and blindside, your in focus for your selected focus bespeak! This back button focus is exactly what I use for my DSLR shooting and it’s incredibly versatile, especially for street shooting.

Zone focus is fabricated incredibly easy with the focus peaking. Yous tin can prejudge your distance, get a representation of it and your ready to offset shooting from the hip. Can’t be easier than that, right? Wrong — the GR III
blows information technology out of the water.

For fast paced street shooting, the GR uses snap focus settings. You can ready it to automatically focus on objects within a ready ranges. This is incredibly fast and intuitive if you know how to apply information technology correctly, and was the only way I shot while using the camera. I just click it into 2m focus zone and keep the camera at f/8 (super deep DOF especially with an APS-C) and basically I never miss a shot, even from the hip. With no manual focus ring that may sideslip out zone while its resting in my pocket or in a bag, you lot know you lot’re e’er ready to shoot at your preset distance — no peaking at the screen or EVF required. 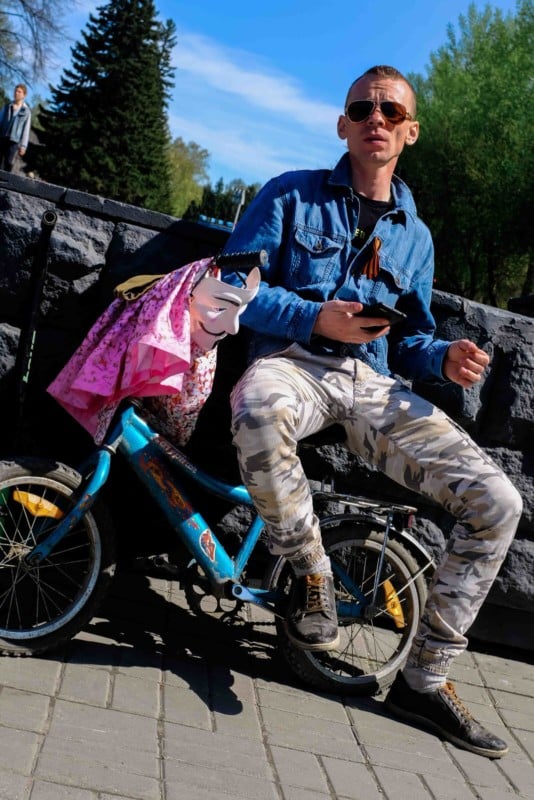 Equally with all Fuji X serial the epitome quality is fantastic. The 23mm f/two Fujinon stands shoulder to shoulder with my much more expensive Summicron 35mm — I accept even taken to reducing the sharpness on my JPEG settings to get a softer, more filmic look. That 10-Trans Sensor APS-C sensor is phenomenal, as I already knew from my experience with X-T10 and the X-Pro, then no surprises hither. Skin tones in particular, always await amazing with Fuji.

Every bit far as pixel peeping goes, the GR Three’s toe-to-toe with the X100F. It seems that a fantastic lens paired with a 24M sensor makes for some seriously middle popping pictures, no thing who the manufacturer is.

While technically as skilful as each other, the Fuji and the Ricoh render JPEGs in a very different way. While both can be customized, simply every bit a thing of personal gustatory modality, I prefer the factory setting of the GR III. I of the big differences for me is the green spectrum. In the default modes, Fuji JPEGs can do some strange things to leaf.

I also prefer the GR III’due south Image Controls to most of the Fuji Film Simulations; especially the the high dissimilarity black and white and a very tasteful vivid setting (punchy but non grotesque). These considerations put the GR III ahead, merely not enough to give it sizable advantage over the X100F. Photos tin hands exist manipulated so this is a point stalemate for both cameras. 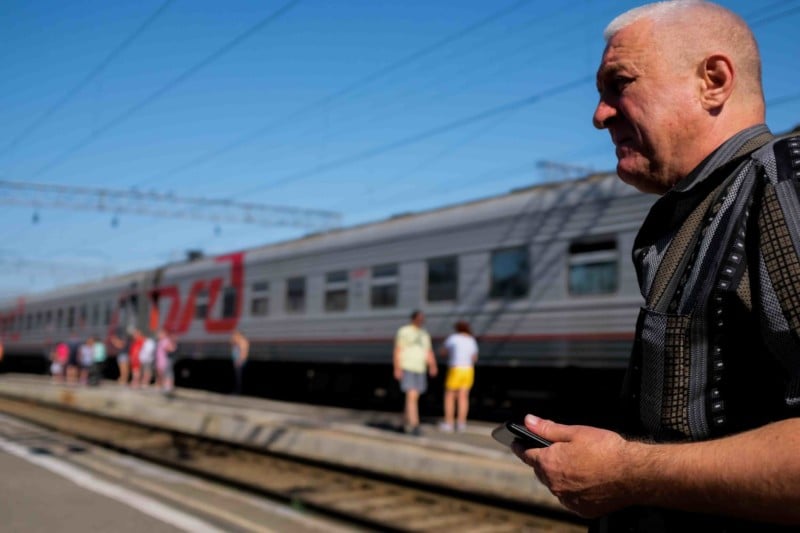 The GR III, despite being smaller is still far more than comfortable in my impuissant big hands. The menus, and command I practice find to be easier to use in near operation. I love how customisable the camera is, and this comparison really showed me how great the touch screen is equally a camera control. I, to this twenty-four hours, withal tap on the screen of the X100F and forget the fact I can’t navigate menus and focus by touch.

The GR III is too the most compact ‘professional’ camera I have ever used, especially with its retracting lens. I’m far from the starting time to country that information technology shoots and carries more than like a smartphone than a camera, which is fantastic. Phones are far easier and stealthier than any camera you tin buy and the GR Three handles like one, but with amend prototype quality.

In terms of size, Fuji kind of occupies the reverse Goldilocks zone — as well big to be a compact that fits in your pocket, and too small that it lacks the perfect ergonomics of something like the X-Pro or X-T3. 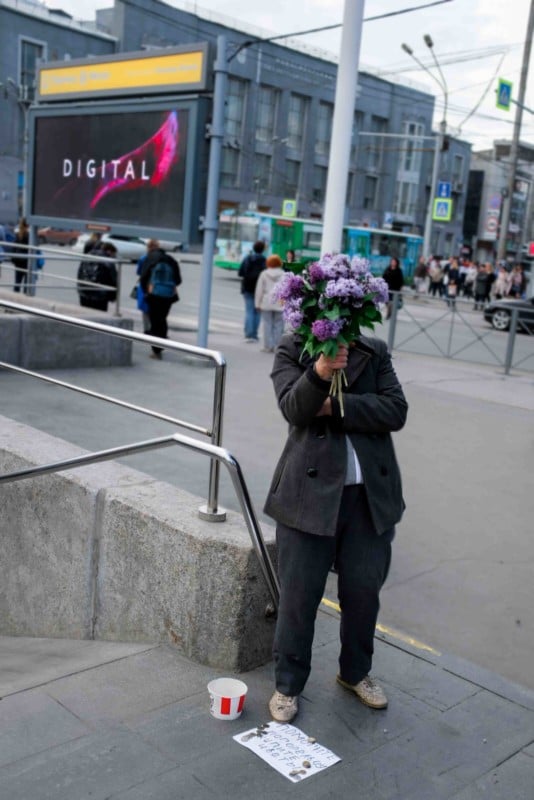 While the GR Iii’s handling and size is better than the X100F, it must be mentioned that over fourth dimension I gained some perspective on my initial gripes with the X100F’s handling.

The most important affair being that the tactile controls of the Fuji offer the advantage of being able to set and forget. Whether the photographic camera’s on or off the settings can be dialed in, checked and changed quickly to come across the conditions. Contrast this to the GR III, where all controls are but visible while the back screen is activated. A fairly minor consideration to be made, but I felt it deserved mentioning. 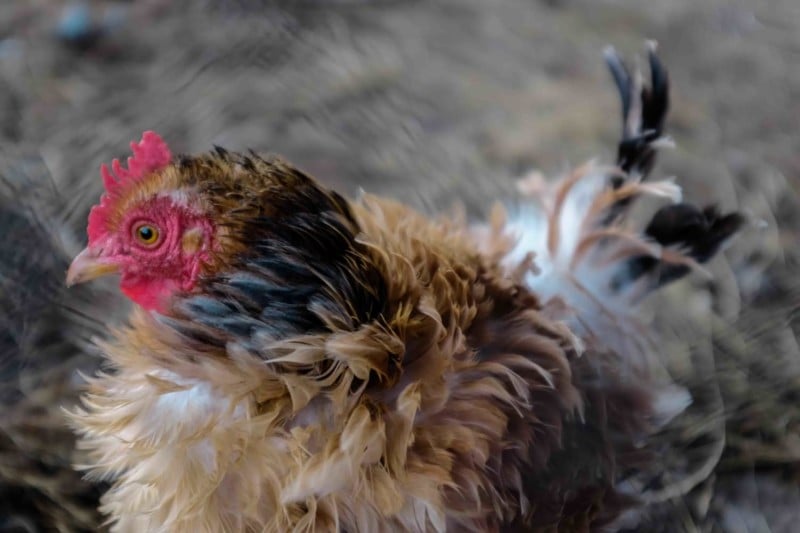 Additionally, Fuji’s larger size gives information technology longer battery life, and that’s a huge plus over the GR III. In the short time I was shooting with the GR III, I realised very apace the 300 shot maximum of the bombardment meant that I would have to carry an additional set of batteries with the camera. Non so much extra weight and size, but more fiddling around and having to remember to charge. I am able to clasp 400 shots out of the X100, which is usually more than enough for me for an afternoon of shooting. 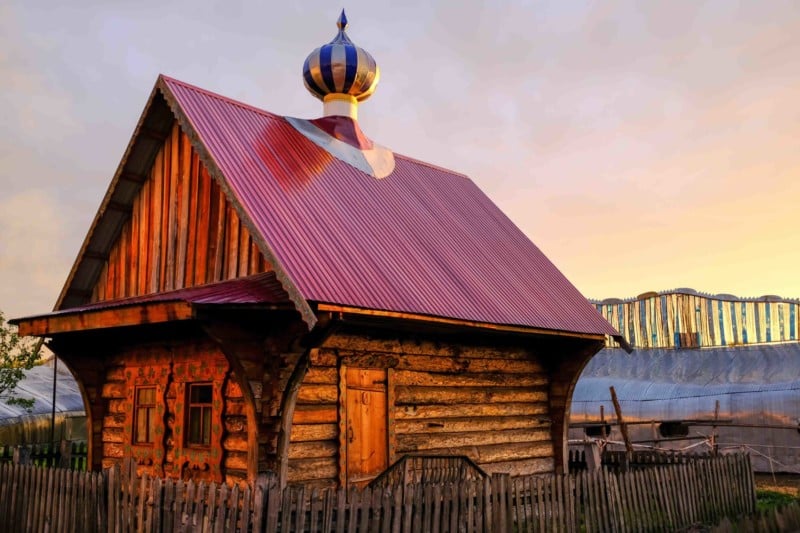 The GR Three does have in-torso stabilization, while the Fuji handles far better at higher ISOs, which for me makes the cameras equal in terms of low light operation. I generally fix my aperture and allow the program take care of the ISO and limit my shutter speed to 60th of a second. If I had the Ricoh, I would be limiting my shutter speed lower, only the fact that the photographic camera tin can only produce usable images at around ISO 1600 ways that I would have the same limitation.

The major drawback for the GR Iii is the lack of the pop up flash, originally bundled with the GR I and GR II, which was a major selling point for me. The flash on the X100F is serviceable for fill-in wink, and is surprisingly powerful for its size. Still non as powerful every bit what the GR 2 offered, merely it does the chore when yous demand it to. 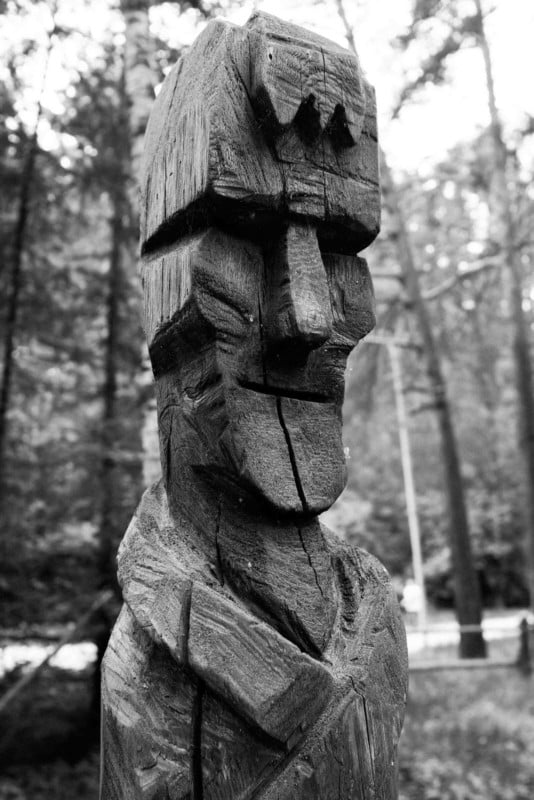 I personally, am not accustomed to the 28mm focal length of the GR 3. Information technology’southward focal length is almost identical to the camera I deport everywhere with me on my iPhone, albeit with far lesser image quality compared to the GR Iii.

Irregardless, for my style of shooting this focal length is both too wide and too narrow, me being accepted to shooting with my two favorite lenses — either a 35mm Summicron or a 18mm Zeiss Distagon.

I like to alternating between low distortion of the 35mm for my travel and lifestyle shots and the hyper distorted 18mm for an enhanced perspective to shrink people into the greater landscape. I did consider the optional wide lens attachment for the Ricoh (opens it up to 21mm focal length), only this meant conveying an additional slice of equipment and an extra cost. With a fixed lens photographic camera it’s best to go with the focal length that improve suits your manner, and for me this is the X100F. 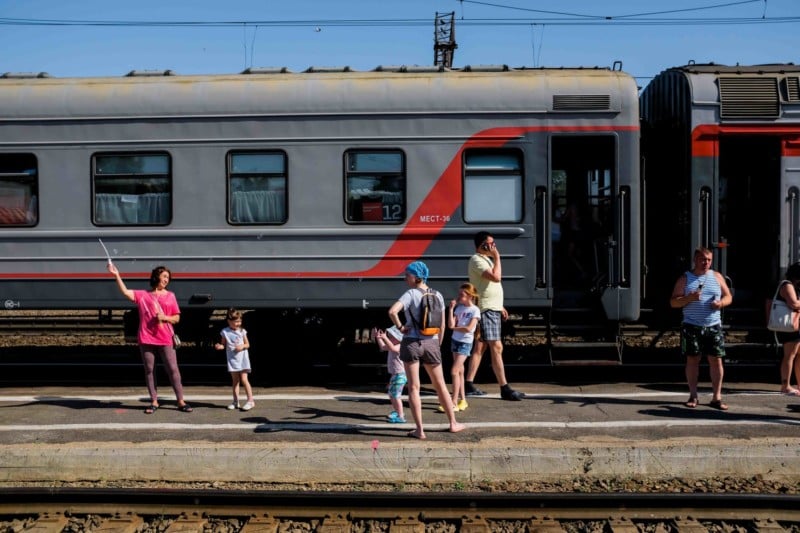 So We Accept a Tie

Merely the X100F has a hidden ace up its sleeve in regard to focal length: if your in S focus mode, simply turn the focus dial and your camera will digitally zoom to fixed 50mm and 75mm equivalent focal lengths. I dear this feature, as this tin still return very usable pictures using the 24MB sensor, making the photographic camera incredibly versatile. It’s like carrying all the major primes, without the fuss of having to both carry and change betwixt them.

That’due south hands worth a bonus signal to Fuji, bringing the score to: 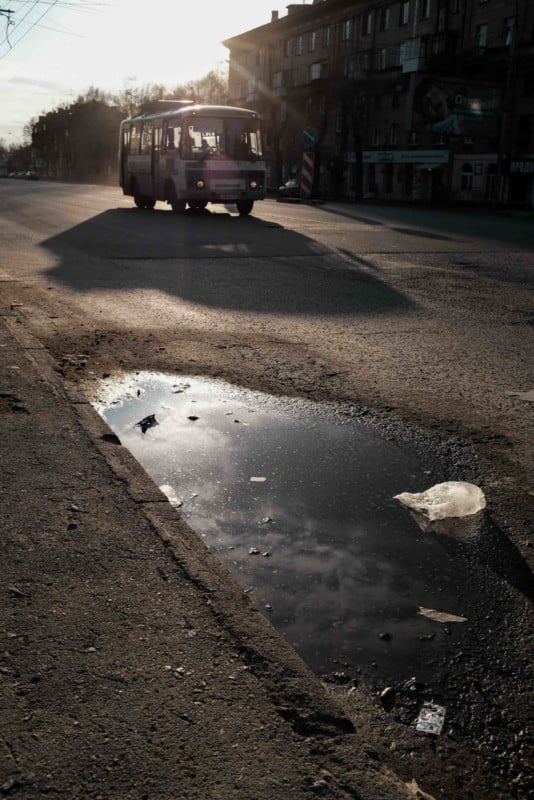 Absolutely, considering this is a heavily bias comparing since I did indeed purchase the X100F and have spent far more time with information technology. I don’t have whatever images worth sharing from my time with the GR III, since I generally used it in and effectually the camera store that generously trial their demo model. All of these images here were taken on the X100F.

That being said, I am sure that, had I had more time with the GR, I would have come to terms with a lot of the things I gripe near in this comparison. More than anything, my primary rationale for ownership the Fuji was that I am far more accepted to the 35mm focal length. A camera is a camera, and you tin can’t go wrong with either of these two kingly compacts. Both take fantastic photos, and in that existence the whole aspiration of photography, they are completely equal in that nigh important regard.


About the author: James Cater is a digital and analog photographer, film lab operator, and model. The opinions expressed in this article are solely those of the author. You can find more than of Cater’s work on his website and Instagram. This article was also published here.