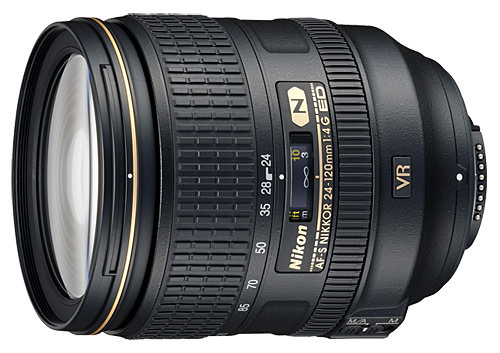 The Nikon 24-120mm f/4G ED VR is a constant maximum discontinuity lens with a 5x zoom range that is designed for professional and advanced amateur photographers that need a mid-range lens with image stabilization to be used for many types of photography, including street, nature, travel and wedding ceremony photography. Dissimilar variable-aperture lenses that typically have an discontinuity of f/v.6 when zoomed all the fashion in, the Nikon 24-120mm stays at f/4 throughout the focal range, giving a i-stop reward to the 24-120mm f/four over variable-discontinuity lenses on the long stop (for example, the older Nikon 24-120mm f/three.five-5.6G lens had a maximum aperture of f/5.6 beyond 85mm and the current 28-300mm f/iii.5-five.6G VR superzoom is at f/5.six beyond 105mm).

Detailed specifications for the lens, along with MTF charts and other useful information can be institute in our NIKKOR 24-120mm f/4G ED VR page of our lens database.

When extended to 120mm, the lens gets bigger and almost reaches the elevation of the fully extended 24-70mm (apparently not quite as alpine as the Nikon 28-300mm):

The lens is congenital very similarly to the Nikon 28-300mm, with a plastic exterior and focus ring. The zoom ring is besides made of plastic and is covered with rubber for resistance. About of the recently-announced lenses by Nikon have a plastic exterior, which does not necessarily mean that the lenses are not solid – the interior of the Nikon 24-120mm contains enough of metal (which obviously contributes to the weight) and the lens mount is also fabricated of solid metal. When yous zoom in, the first extension tube by the zoom ring is metal, while the second ane that connects the forepart of the lens is plastic. The front part of the 24-120mm does not wobble when the lens is fully extended either. In many ways, the construction of the lens is very similar to that of 28-300 – a very high-quality build. The lens should be able to withstand common cold and hot temperatures, but I would non go out it nether the pelting, extreme moisture, and dusty environments.

Weight-wise, it is not a heavy lens when compared to the Nikon 28-300mm or 24-70mm lenses. Weighing virtually 670 grams, it is 230 grams lighter than the latter, which is a big difference. The lens feels very solid in easily and the zoom action is smooth and easy to rotate from 24 to 120mm and vice versa – information technology takes a half plough to go from 24 to 120mm. The focus band is made of plastic and is located on the back of the lens, which I find backward. I am used to the zoom band being shut to the lens and the focus ring to be nigh the lens barrel. Merely if you have shot with other DX lenses before, y’all should have no problem with getting used to it.

When changing lenses, effort to do it with the lens fully zoomed out to 24mm. The rear lens element moves deeply into the lens when extended to 120mm and yous could end up with a lot of dust/debris inside the lens if yous are shooting in windy and dusty weather condition. This is nothing to be scared of – even some of the professional fixed-width zoom lenses such as Nikon sixteen-35mm do this.

Similar to other modern lenses, the autofocus motor of the Nikon 24-120mm f/4G VR is quiet and authentic even under challenging lighting conditions, thanks to the AF-S Silent Wave Motor. Autofocus speed is quick, certainly much quicker than on the 28-300mm lens. If you took 24-70mm, 24-120mm and 28-300mm lenses and tested AF speed on all three at the same fourth dimension, the 24-70mm would be the start (blazing fast), with the 24-120mm 2d (fast) and the 28-300mm last (tiresome). If you measure the AF speed and compare to the 24-70mm, the 24-120mm is virtually 2x slower, while the 28-300mm is about 3x slower than the 24-70mm. Focus tracking works reasonably well for photographing big mammals and people, with the lens getting authentic focus nigh every time in continuous mode. I took many shots of my fast-moving kids with this lens and I had no issues getting accurate focus.

All the same, the lens does have an issue tracking fast-moving subjects. When I was in Yellowstone, I tried to photograph a pretty fast bird on one of the hot springs. I shot quite a few images of the bird while information technology was moving and the AF speed of the 24-120mm could non take hold of up, oftentimes yielding out of focus images. After shooting with fast telephoto lenses like the 70-200mm, it was quite disappointing to shoot with the 24-120mm for tracking small, quick subjects similar this bird:

I ended up getting a reasonably sharp shot (which is already challenging at 120mm, since the lens does not resolve very well there) only after the bird stopped moving erratically.

So keep this in mind when shooting with the 24-120mm. It is definitely non a lens you lot want to utilise to photograph fast-moving wild animals! For everything else though, it works really well.